Last week, 100+ entrepreneurs, venture capitalists, executives and engineers attended a presentation titled:  When you build it, they don’t come:  The chronically low engagement in health IT.  Sponsored by the San Francisco Chapter of the Health Technology Forum, the presentation featured Kyra Bobinet, MD, MPH.  Bobinet is the former Medical Director for Wellness Programs at Aetna who currently researches technology-enabled behavior change and health engagement in the Stanford University Behavior Design Lab.  Assisting Dr. Bobinet was Andrew Zimmerman, her colleague at the lab. .

The importance of improving patient engagement with health IT was underscored by the high-profile failure of WellPoint’s mobile app (see WellPoint Tries to Avoid Another Mobile ‘Crapplication’).    The tools developed by the Stanford Design Lab can help developers improve the probability of success and also provide employers, hospital executives, medical professionals, insurers and other buyers of these technologies with tools to evaluate the “engagement potential” of the technologies they select and avoid the type of problems which plagued Wellpoint.

Bobinet and Zimmerman’s presentation posed broad questions, presented thumbnail overviews of important research and took full advantage of the audience’s experience which is summarized below.

What thinking errors do IT designers bring to the table?   Analysis of failed projects has identified common behaviors to check for:

How can you design systems which cause change?   Most developers know that they need to address patient needs, wants and fears.  What they lack is a research- based model of emotions which they can use systematically in the development process.  Bobinet’s team uses research by Jaak Panksepp  to identify seven emotional factors which designers need to keep in mind in the development process.  Six of the emotions are not surprising – fear, rage, despair, caring, play and lust.  However, Panksepp has identified a seventh emotion which “trumps the other six” and is often overlooked.  This is the seeking emotion which motivates patients (and all humans) to relentlessly search for information about their ailments.

One example of successful use of the seeking emotion brought up in the discussion was WebMD, which provides a number of ways to search for information about medical conditions, treatments, medications which can engage users for hours and motive them to return to the site.  Another was SuperBetter, a wellness site which engages participants in a variety of challenge and contests as part of their quest to improved health. 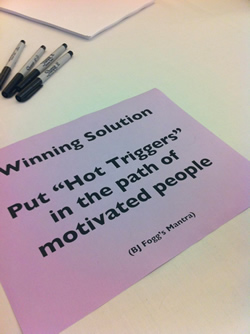 How do you really change behavior?   Reseach at Stanford has led to The Fogg Model which indicates  that behavior change requires that three criteria be met – patient motivation, ability to change and a triggering  event.   The probability that your nifty software will change behavior is highest when you have a highly motivated patient faced with a low degree-of-difficulty triggering event.

This model suggests that rather than trying to eliminate unwanted behaviors, it is best to swap out a “bad” behavior for a desired one.  For instance, rather than trying to completely stop snacking, substitute healthy almonds for less healthy potato chips.  Another example cited in the discussion was the 12-step programs used for recovery from substance abuse.  These programs change very difficult behavior patterns by breaking the change process into easier to achieve objectives including “one-day-at-a-time”, “90 meetings in 90 days” and “12 steps”.  This type of thinking can improve health IT design.

What other emotional factors do developers need to be aware of?

Thinking styles are frequently overlooked.  According to Zimmerman, 90% to 95% of what we do is guided by very fast, intuitive judgement.   The other 5% to 10% of our thinking utilizes the logical, step-by-step processes drilled into medical and software professionals.  Unfortunately,  this means that when designers of health technologies try to engage users with logical thinking, they turn-off the user very quickly.  Zimmerman suggests thinking in 1-10-30 second intervals.

Also, social anxiety is very powerful and prevalent as both a fear and a motivator.  As a result, most people are more motivated by programs which help them to manage their self-image, not their health.   As with advertising campaigns, a diet program which is presented as a way to make you feel comfortable in a swim suit at the beach will be more effective than one which touts lower cholesterol readings.

Finally, environmental triggers also need to be addressed in design.   For instance, Bobinet noted in a weight loss program using the sophisticated Withings scale and tracing devices, the daily morning weigh in can become an anxiety provoking experience which can cause users to reject the weight loss effort.  Also, she described a sophisticated wellness program with strong incentives and technology support which was undermined by the unhealthy vending machine snacks offered at the company.

Medical technology is in the midst of an innovation explosion with thousands of Apps, SaaS platforms, wearable devices, big-data tools and portals all competing for decision-makers’ dollars and claiming to deliver better outcomes and lower costs.   However, most of these offerings will fail, frequently because they don’t engage the customers.  Dr. Bobinet made a convincing case that the Stanford Design Lab’s tools can help developers do a better job of developing or selecting technologies which deliver patient engagement.  More information can be found at Stanford Persuasive Tech Lab and at BJ Fogg’s website.

Pronoy
Pronoy is the Organizer and Founder of Health Technology Forum (HTF), a socially responsible organization promoting technology access and adoption to bring better healthcare to the masses. He is an advisor, board member, and has founded companies in the health 2.0 space. Pronoy has 20 years experience in technology, most recently in the healthcare, mobile, and service provider marketplaces. Pronoy held senior management positions in large conglomerates as well as startup companies. Pronoy earned his BS in Electrical Engineering from the University of Texas at Arlington and Master’s of Business Administration from the University of San Francisco.
Recommended Posts

Search
Popular Posts
COME TOGETHER FOR HEALTH™
Improving access to affordable health care by promoting the development and adoption of innovative technologies that transform health for the better.
Popular Posts
Twitter
Copyright All Rights Reserved © 2014
Contact Us